Acapella on the Rocks. The movie 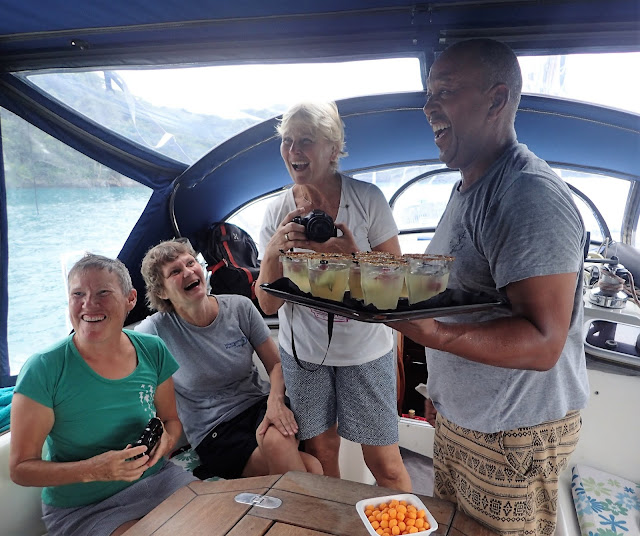 In the mean time, we sailed in three days from Vanua Balavu to the mainland, escorted by Atla. We arrived safely in Vuda Marina, where we spend a few days together. The days in Vuda we used to  inquire about the possibilities and made some arrangements to have the rudder and other damages repaired. Coming week we will be in Denarau Marina, where Acapella is on the hard. A new rudder will be made on the spot. 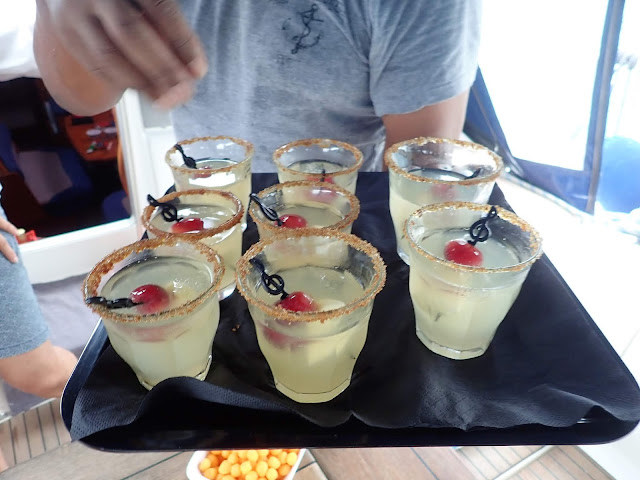 The new Acapella on the rocks cocktail is very populair.

To order a new rudder from Jefa in Denmark, will take 5 weeks production time and a couple of weeks delivery. Now, hopefully, we will have a custom made rudder in one week time. 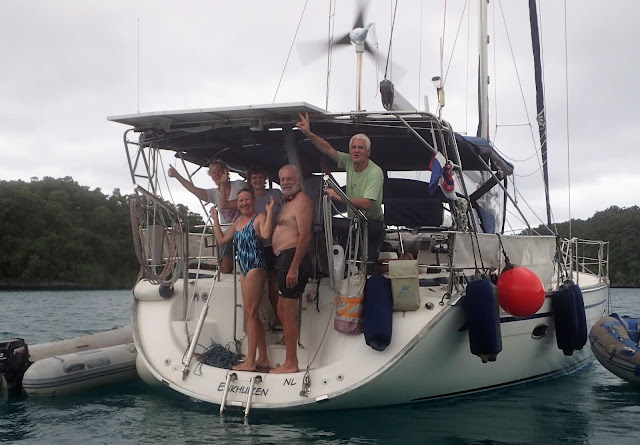 Here you can have a look at our video (with English subtitles), about the emergency repair of the rudder.

Acapella on the Rocks, the movie.


We want to thank everybody for all the heartwarming replies and good wishes after we wrote our last blog about our stranding with the Acapella. We really needed that. We are good and look forward to our next adventures.
Gepost door Crew Acapella op dinsdag, juni 25, 2019 1 opmerking:

Acapella on the Rocks 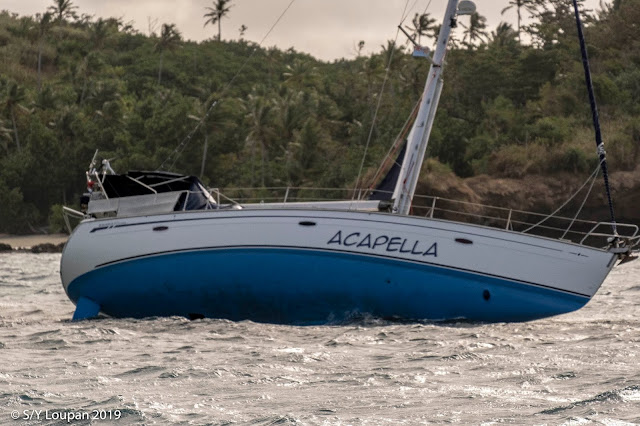 Last week we've experienced our worst nightmare ever, by hitting a reef.
We had a wonderful night sail from Savusavu to Vanua Balavu and just before entering the bay of the main village, Daliconi, we hit a reef that was not on our charts. It was impossible to reverse or to turn. We were stuck! 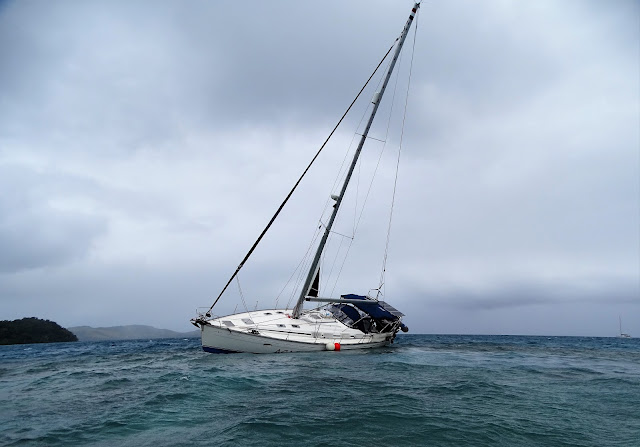 Luckily we were together with three other boats, Jonas, Atla and Loupan, who where already anchored in the bay. We'd send out a 'pan pan' or an emergency message to them. Atla and Loupan immediately responded and came to the rescue, while Jonas went to the village to get help from the local fishermen. 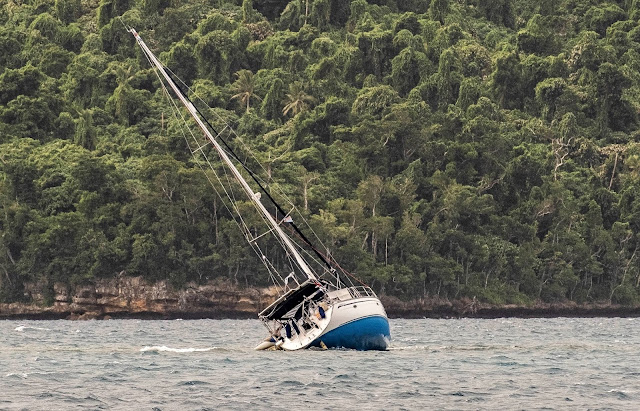 After several attempts, in which the 250 m long towline broke and the spare towline got into Atla's propeller, the salvage operation had to be stopped. It became low tide and Acapella was starting to heel over. A new plan was made for that evening. High tide would be at 22.45 hrs, so we had some long waiting hours ahead of us.
While the boat was slowly heeling further and further, Martin went into the water to inspect and investigate the possibilities to minimize the damage. He tried to put some fenders between the sharp coral and the boat, but they came up floating again. Then he decided, with a crowbar, to flatten the surface as much as possible, so no sharp rocks would puncture the hull. (He apologized to the coral for the damage, but there was no other way.)

In the mean time I have packed some bags with necessities, just in case we really had to evacuate the boat.

Finally after long hours of waiting, balancing between hope and fear, three boats from the village, with Pelle from Loupan in one of them and Peter from Atla in another, arrived in the pitch dark.
After fixing some lines to the stern and to the mast top, they started to push and pull and after several try's they managed to get us of the reef. It was a miracle, we were floating again.

The previous twelve hours we had been moving in an angle of approximately 50 degrees, which made it very hard to stay upright. 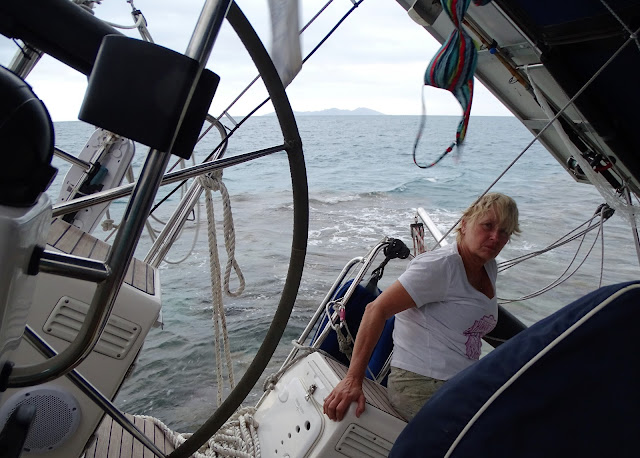 We were towed to the village by Tuta, the Turanga Ni Koro, spokesman for the chief and headman of the village. Tuta invited us to come over to the village the following morning, to do the Sevusevu ceremony.

After a good night sleep we woke up very relieved, because we were still floating. Only the rudder was broken in half and there was some cosmetic damage to the hull, but fortunately no leakage.

Together with the other boats we went to the village to do the Sevusevu.
During the ceremony you will be introduced to the Turanga Ni Vanua (the Chief) and to some of the elders. As a token of your friendliness and willingness, you offer the Chief a nice bundle of kava roots. From these roots a slightly sedative drink can be brewed.
After you've done the Sevusevu, you have permission to go everywhere in the waters and surroundings of the village. You'll become part of the village and the villagers will offer you all the help they can give. Of course it also works the other way around.

During the ceremony we had the change to thank the Chief and express our gratitude for the help we've already received from the people of the village. 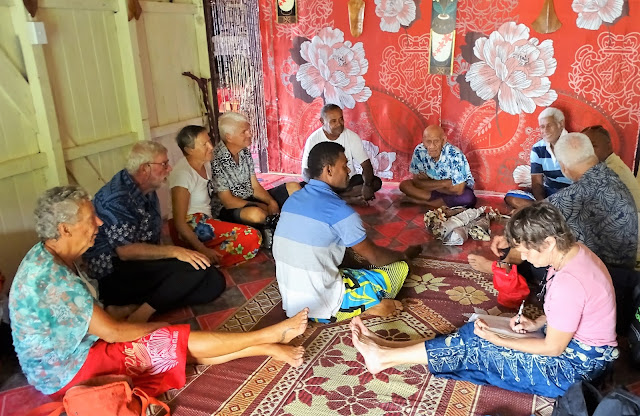 Tuta showed us around in the village and after visiting the little school, we went back to the boats. 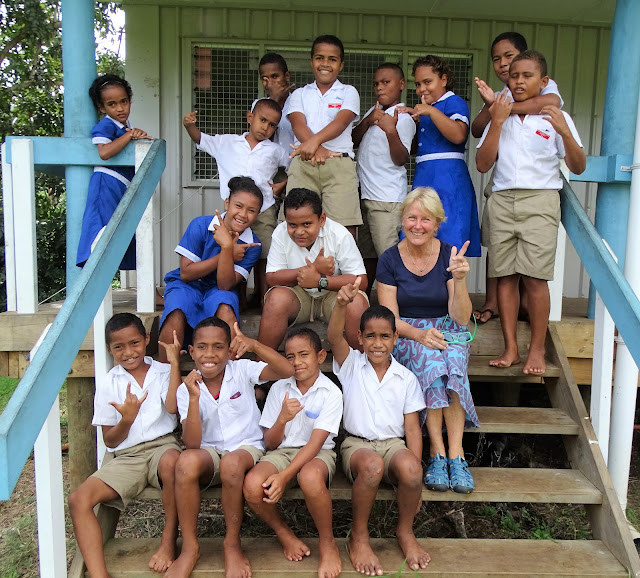 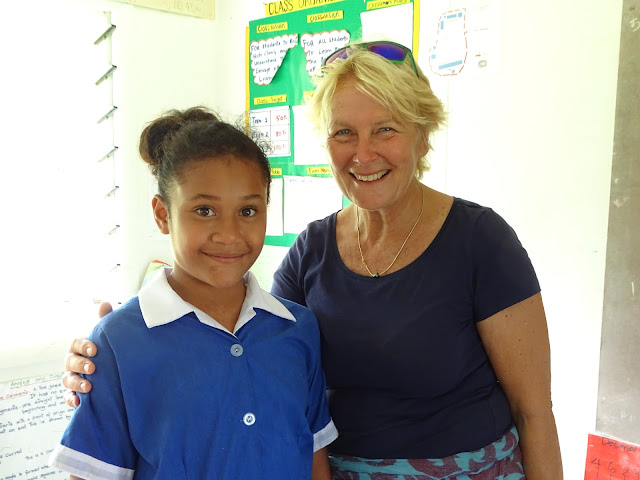 She wants to become an airhostess

After lunch, Pelle and Peter came over to Acapella to see how we were doing and discuss a plan for an emergency repair of the rudder. The complete left side and 45 cm from the lower part of the rudder where gone.
We agreed to go the Bay of islands, which is a very protected anchorage, lower the rudder in the water, lift it aboard Acapella and try to fix it as much as possible.
(If no repairs would be possible, Atla is willing to tow us all the way back to the mainland. Which will be at least a three day sail)

On our way to BOI, looking out for uncharted reefs

After a night with thunder, lightning and a morning with pouring rain, the rudder was easily removed by Peter, Pelle and Martin. 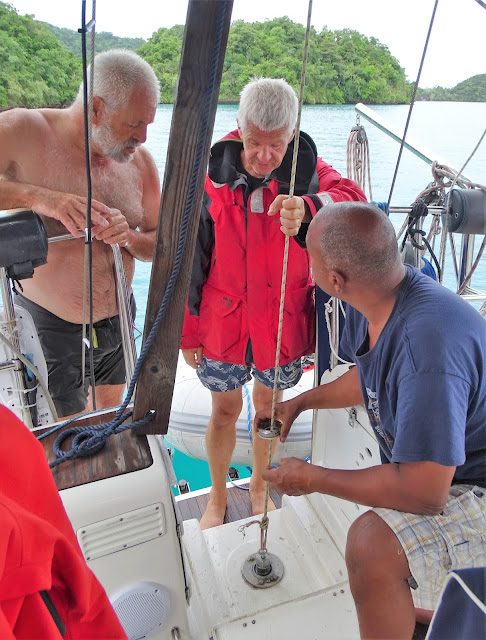 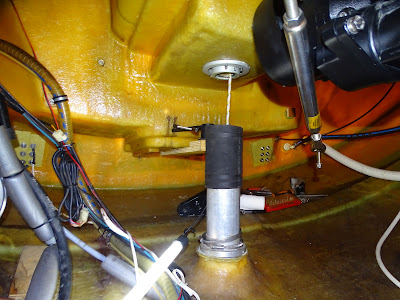 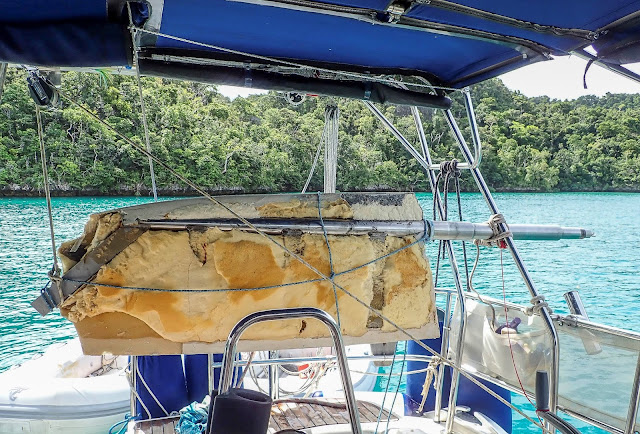 Eva from Atla, made a special dough with flour, salt, olive oil and water (Trolldegs in Swedish) to give the broken side of the rudder some body, so it will have a profile. (Yes the same Eva who made the beautiful painting for my birthday) She is a real artist. 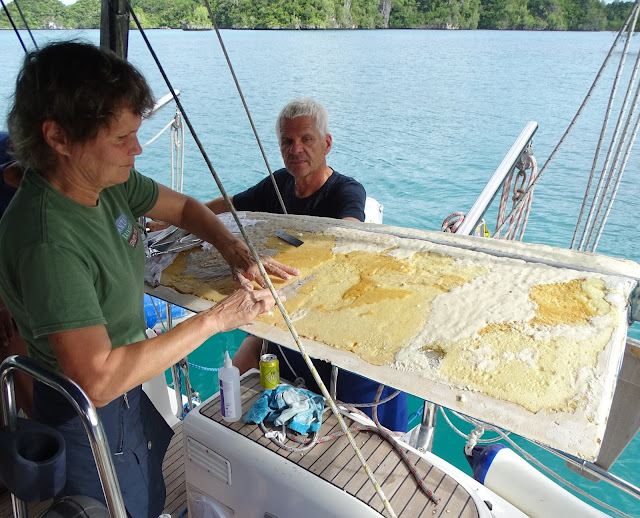 The next day, Pelle, Peter and Martin strengthened the structure with three layers of glass fiber and epoxy. 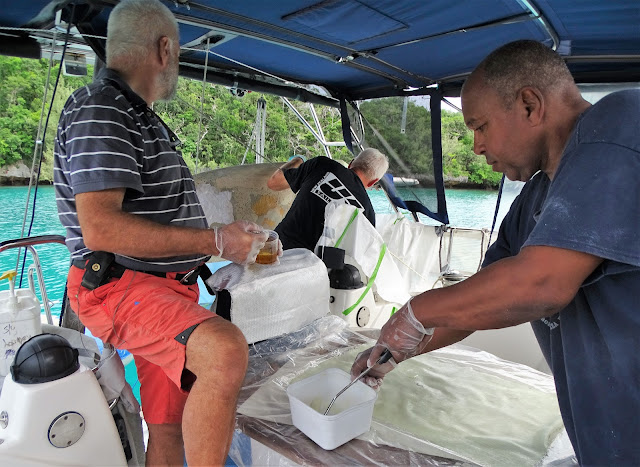 The third and last day of the rudder project was spend with cutting the excess fiberglass away, sanding and waiting for the rain to stop.

The rudder had become a real piece of art, with the special 'trolldegs' from Eva as an inside and the glass fiber from Peter and Pelle on the outside. After it was signed by all the artists, it was lowered into the water again and secured to the Acapella by Martin. 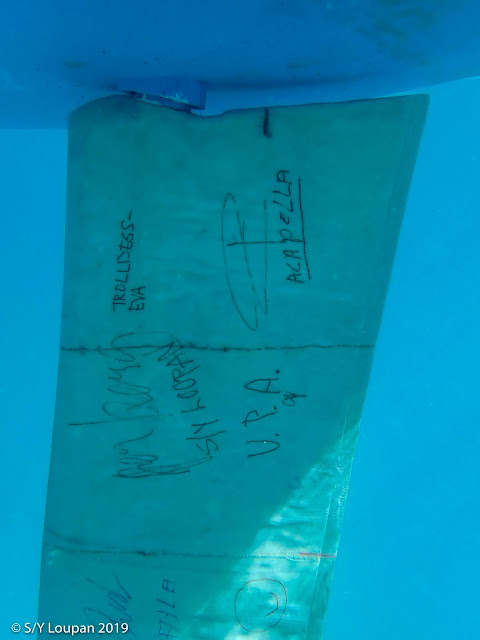 Finally it was time for a big celebration, with a speech from the captain and a toast with a new cocktail, called :

"ACAPELLA ON THE ROCKS" 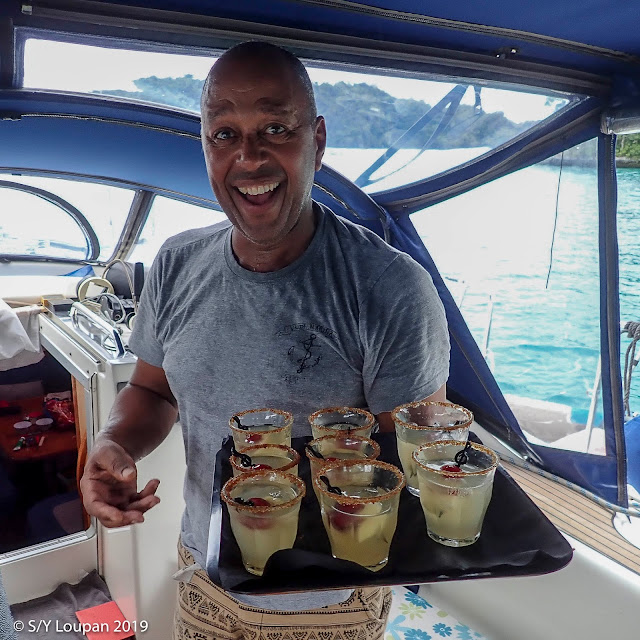 (Secret receipt: 2 fingers gin, 1 finger white wine (preferably Chardonnay ;-)) 2 fingers fruit syrup mixed with water to taste. Add some tonic water for the bubbly feeling and your good to go. The finishing touch, 2 drops of Angostura, a couple of ice cubes and some nutmeg) 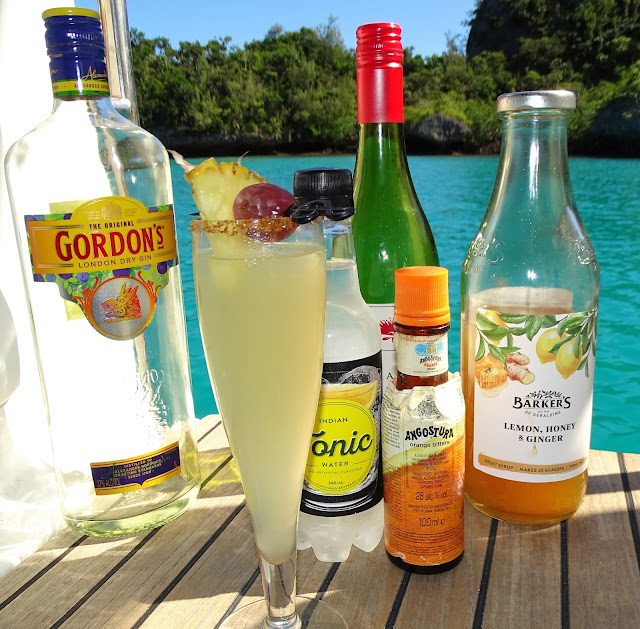 We realize that it has been a close call and without the help of our sailing friends, it could have ended very differently.
Pelle, Ulla, Peter, Eva, Jacob and Hanny, many, many thanks!! Without you we would have been lost. 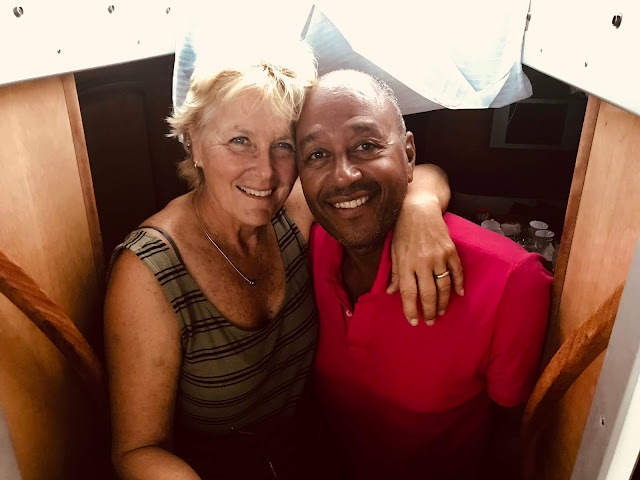 For now we will sail back to Vuda Marine. Atla will accompany us, just in case. The boat must be hauled out and thoroughly checked, the cosmetic damage has to be repaired and a new rudder has to be made/ordered.

Keep an eye out for our next 'video' blog. "Acapella on the rocks, the emergency repair". 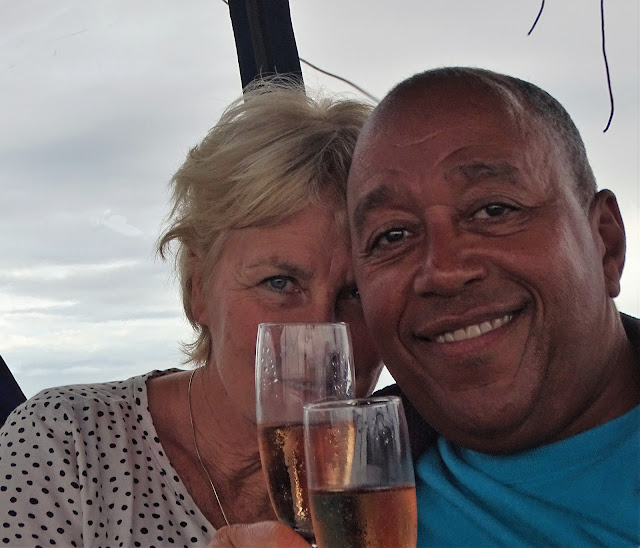 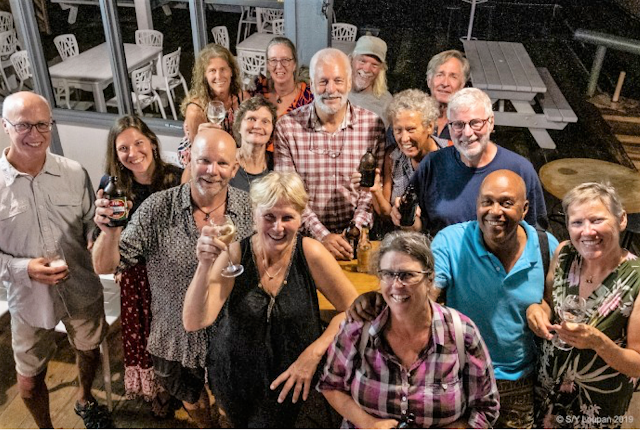 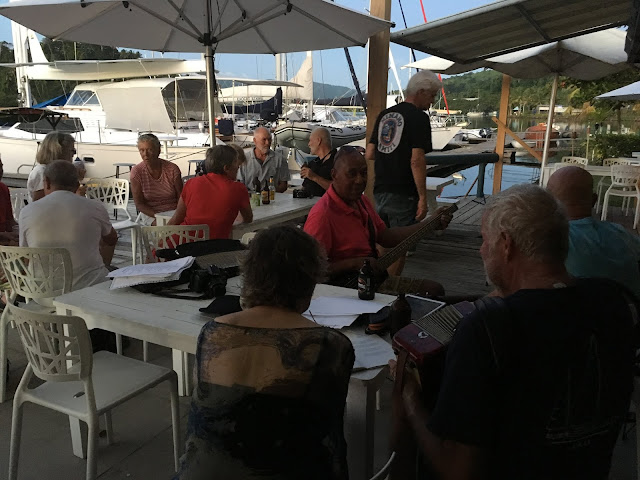 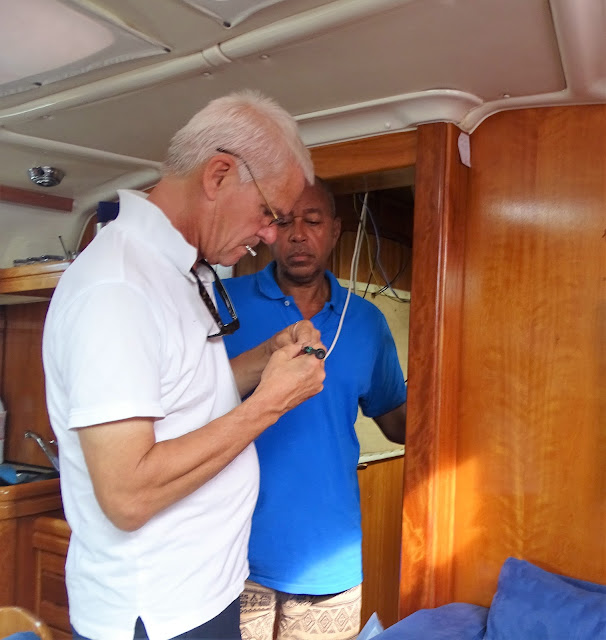 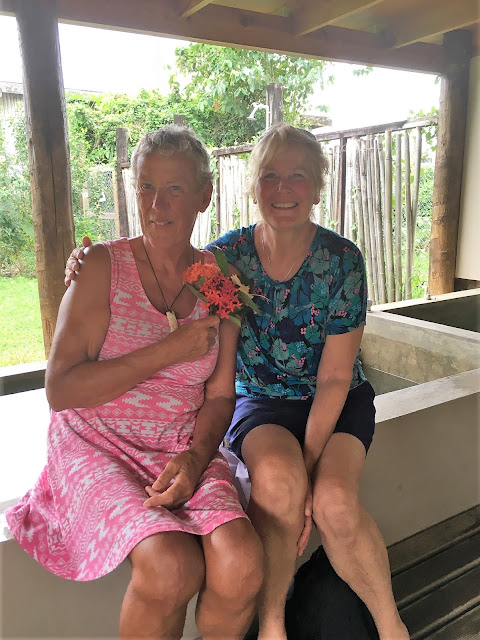 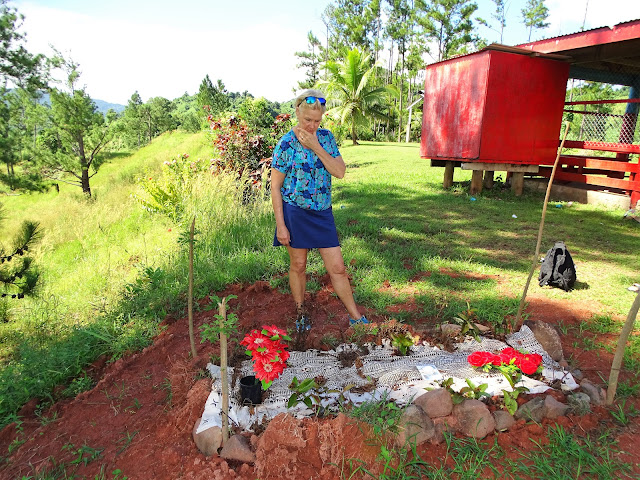 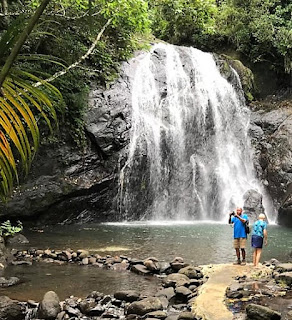 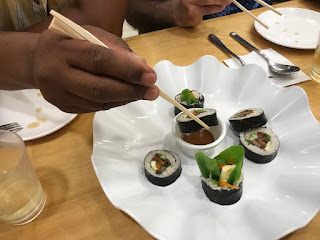 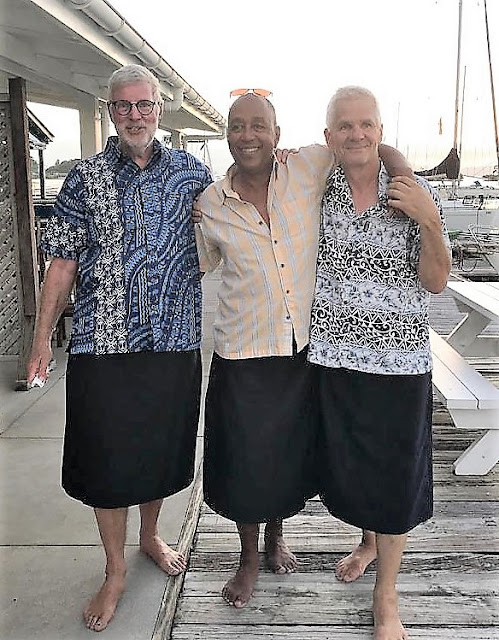